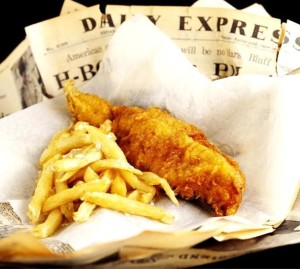 I was browsing on-line recently when I came across an article which caught my attention.  It claimed that community choirs now outnumber Fish and Chip shops in the UK. This amused me because I like food almost as much as I love music and ‘Fish and Chips’ just happens to be my favourite takeaway treat.

It’s possible to draw two different conclusions from this comparison of the numbers of choirs and ‘chippies’ in the UK and I was pretty certain that the point being made was that more and more choirs are being formed.  After all, TV schedules have recently included singing-related programmes such as ‘The Choir that Rocks’ and ‘Last Choir Standing’. These programmes have been extremely popular and will certainly have encouraged many viewers to join a choir.  With more people wanting an opportunity to sing, there has to be an increase in the number of choirs.

On the other hand, the fact that choirs now outnumber fish and chip shops could also indicate that the good old British Chippy is disappearing from our streets. Taking this as a good excuse to do my own market research, I visited my local ‘Friendly Fisheries’ and in no time my concerns had vanished, along with the portion of fish, chips and mushy peas that I’d bought for my lunch.

Perhaps it’s no surprise that I have a passion for both music and food. After all, whilst food nourishes the body, music is said to nourish the soul. In the words of Beethoven, ‘Music is the electrical soil in which the spirit lives, thinks and invents.’ This similarity between food and music appears to extend even further, especially if we look at recent trends.

The past sixty years have witnessed a significant change in our diet.  Meals today often consist of tinned, frozen or pre-packed foods rather than fresh meat, fish and vegetables.  For some people, takeaway meals or convenience foods also make up a large proportion of the weekly food intake.  These foods often contain high amounts of salts, sugars, fats and artificial flavourings which can be harmful to health. As a result, hardly a week now goes by without doctors, nutritional scientists and even ‘Celebrity Chefs’ warning us of the dangers of following such an unbalanced diet. Indeed most people now accept claims that the increased levels of obesity, diabetes and heart disease that we see today are directly linked to these changes in our eating habits, combined with an increasingly sedentary lifestyle.

Popular music has also evolved substantially over the same period. ‘Rock and Roll’ might not have literally shaken the world in the 1950s, but it certainly shook up western society.  It helped to create a division between adults and teenagers that eventually led to the term ‘generation gap’ being coined. The heavy rhythmic beat which underpinned Rock and Roll music has not only been adopted by almost every popular music trend to follow, such as hard rock, heavy metal, punk, techno, hip hop and rap, it’s also become an increasingly dominant feature of those styles of music. But of course there’s more to music than just a powerful rhythm.  Melody and harmony, as well as variations in volume and tempo are just as important, if not more so.

It’s very tempting to draw a comparison between the modern food diet, with its high concentration of fats and carbohydrates, and the popular music diet with its emphasis on a heavy rhythmic beat. Given what we know about how the food that we eat can affect our health, is it possible that an imbalance in our music diet could also be bad for us?

The Effect of Music on Behaviour

Various studies have in fact been conducted into the effects of music on behaviour in recent years.  The results of these studies suggest that certain types of music can adversely affect attitude and conduct. It is claimed that adolescents who listen regularly to heavy metal music are more likely to have conflicts with parents and teachers. Other research has linked rock music with high levels of teenage promiscuity and both police and politicians have in the past connected ‘gangsta rap’ to incidents of criminal violence. In many cases those conducting the research have suggested that it is the lyrics rather than the music which leads to these changes in behaviour.  Other studies have however shown that animals exposed to rock music for prolonged periods also show adverse behavioural changes. Clearly it can’t be the lyrical content which caused this response in animals.

Music and the Human Energy Field

I know from personal experience that too many visits to the chippy can add inches to my waistline. Doctors can of course use their knowledge of biology and human anatomy to explain why this happens and routinely advise that such foods should be eaten in moderation.  A knowledge of biology cannot however explain how and why music can affect behaviour and even health.   This requires a basic understanding of the anatomy of the human energy field, with its energy centres or chakras.

Many holistic health professionals are aware that the base chakra links to the kidneys and spine.  It is in this energy centre that our deep emotional patterns are held, such as hostility, aggression, sensory and sexual responses, as well as patterns of addiction. This chakra resonates with heavy, repeated beats such as those in hard rock music.  As a result, constant exposure to such music can cause over-stimulation of the base chakra.  This brings these deep emotional patterns and imprints to the surface, causing behavioural changes of the type highlighted above.

Just as a balanced diet will aid our physical health, so a balanced musical diet is important for our emotional and spiritual well-being. This doesn’t require that we throw away our CD collections.  We can make a positive change just by spending less time listening to music that’s carried along by a pounding bass, drums and power chords and spend more time listening to music that is more gentle on the ear.

So if a regular intake of heavy metal, techno or rap music is something that you wouldn’t want to totally cut out of your musical diet, then at least try to limit yourself to smaller portions, served less often. Just remember – it’s a bit like eating fish and chips.

Visit the Healing with Music page for more details on how music can affect health.

Don’t worry about your voice – just sing! Where does music come from? Part Six