The Importance of Teaching Music in Schools 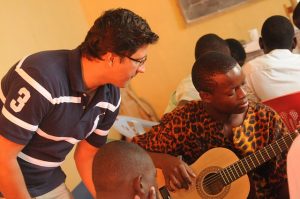 Back in 2010 the UK Government introduced the English Baccalaureate, a key school performance measure that focused on specific subjects: English, mathematics, history, geography, the sciences and a foreign language. As someone who composes music, I remember feeling sad to see that music was not one subjects to be assessed.  Worse still, I feared that this would eventually lead to schools dropping the teaching of music from their curriculum.

I was reminded of this a few weeks ago when I read this BBC news article which confirmed that my fears were well-founded. It reported that researchers from Sussex University are now warning that music “could face extinction” as a subject in secondary schools in England.

Music has been important to me throughout my life so it distresses me to think that future generations of schoolchildren might not have the opportunity to learn about the subject that I love. I do however have other serious concerns about this trend to sideline music education in schools.

First of all, the core subjects of the school curriculum don’t develop the whole of the brain. The subjects included in the English Baccalaureate train pupils to use those skills which are predominantly centred in the left hemisphere of the brain.  These include verbal and analytical skills, logic, factual information processing and reasoning. Although these are all capabilities that should be nurtured by our education system, they are no more important to a child’s development than the skills which exercise the right hemisphere: creativity, imagination, music, spatial awareness, art and intuition. Moreover, these left-brain and the right-brain capabilities complement each other.  When they are balanced, a child is able to deal more effectively with everyday challenges and situations, including the problems posed in academic exams.

Training in subjects such as art, drama, sports, dance, physical education and especially music, all help the development of right hemisphere skills. Unfortunately none of these are on the English Baccalaureate list.  As a result, schools are now giving them a lower priority and even removing them from the curriculum.

Secondly, our education system appears to be ignoring an ever-increasing body of evidence which demonstrates that music training helps to improve brain development and overall academic performance. Research has shown that it enhances neuro-development and blood flow to the brain, as well as the connection between left and right hemispheres. Music training has been shown to improve communication and literacy skills and helps to increase the ability to process and retain information.   These are core abilities which enable us to solve problems and to plan and adapt to change.  Playing an instrument has also been shown to aid physical and emotional health, providing even more benefits to developing children.

Despite this evidence, I can appreciate that it would be a very brave decision for a headteacher to put more resource into teaching music at the expense of subjects that are included in school performance assessments. It would be an even braver decision if the school had a record of poor performance, putting the teaching staff under intense pressure to raise academic standards.

I was therefore delighted when I recently came across this article about a school that’s located a few miles away from where I live. Seven years ago, Feversham Primary Academy in Bradford, Yorkshire was classed as ‘failing’ and was placed in special measures. Today it features in the top 10% UK schools for reading, writing and maths.  This is a remarkable turnaround, especially considering that English is not the first language for 99% of the children.  Indeed around half of all new pupils cannot even speak any English when they start attending school.

So what caused the turnaround? The head teacher, Naveed Idrees took the bold step of introducing music, drama and art into the school day, with every child having up to 6 hours of music each week. He decided to do this instead of giving the children more English classes, more maths and more booster classes. The approach he took may have been unorthodox but it had the desired effect.  Academic results improved all across the school, not just among those who are musically gifted.

It’s a remarkable outcome but there’s no reason why this approach can’t be replicated in other schools throughout the country. Jimmy Rotheram, the school’s music coordinator, certainly believes that educationalists should take note of what has happened at Feversham Primary Academy:

“My hope is that headteachers and people holding purse strings, possibly even the people who make important decisions in the government, will read about our school and realise that creative subjects are not mere add-ons but essential for the progress of all pupils.”