“Someone just got a bit of linen, faked it up and flogged it!” Seriously? 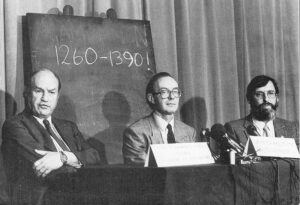 It’s 32 years ago today that a press conference in England revealed that radiocarbon tests had dated the Shroud to the period 1260-1390AD. According to Professor Edward Hall of Oxford University, one of those who made the announcement, “There was a multi-million pound business in making forgeries in the 14th century. Someone just got a bit of linen, faked it up and flogged it!”

It’s clear from Hall’s blunt assessment that he had no doubts about the Shroud’s history but was his claim justified? He’s correct in claiming that there was a lucrative trade in forged Christian relics in the 14th century and churches around Europe would use these to attract pilgrims from far and wide. It’s also true that the earliest verifiable exposition of the Shroud was in 1356AD in Lirey, France, when it was owned by a knight named Geoffroi de Charny. De Charny wasn’t however the only person who claimed to possess the true burial cloth of Jesus Christ during the 14th century.

The image below shows two of the shrouds that were claimed to be authentic relics in mediaeval France. On the left is the cloth that we know today as the Turin Shroud, probably the most studied historical artefact known to man. Despite painstaking research by eminent scientists over many years, it remains an enigma.  It has a subtle image that is free from pigment, paint or dyes.  This image has extraordinary and unique properties and no-one has yet been able to reproduce anything similar or provide a convincing explanation of how it was made.  Forensic evidence found on the Shroud has also convinced scientists that it’s much older than the date given by the radiocarbon test and that it must have been in Jerusalem at some time in its history.

If it is a fake, then the claim that the forgers “just got a bit of linen and faked it up” fails to give them the credit they deserve.  After all, any mediaeval forgers making such a fake clearly possessed tremendous skills, knowledge years ahead of their time and the foresight needed to lay a trail of false evidence that would deceive inspection for centuries to come. 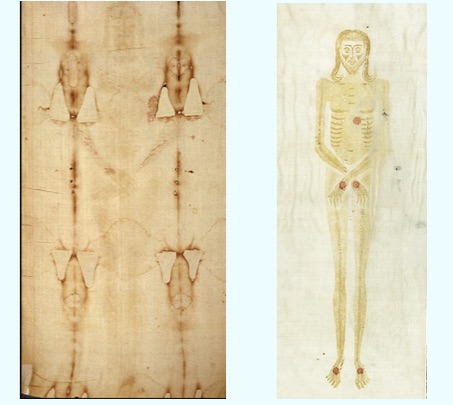 The image shown on the right is taken from a copy of the Shroud of Besançon.   Viewed through today’s eyes, this appears to be nothing more than a simple, almost childlike painting. However, according to art historian Thomas de Wesselow, until it disappeared in 1794 during the French Revolution, it was widely believed to be a true relic with a miraculous imprint.

If such a crude forgery could pass as an authentic relic in the eyes of mediaeval Christians, it’s hard to believe anyone would take the trouble to “fake up” something as remarkable as the Turin Shroud. Indeed if Geoffroi de Charny had engaged a relic forger to make that Shroud, would he even have been happy with it?  It’s an interesting thought that Monty Python’s Flying Circus might have had some fun with….

SCENE: Inside of a shop owned by a purveyor of craftsman-made, fake relics (and Norwegian Blue parrots).

Charny: Hello, I wish to register a complaint.

Charny: Never mind that, my lad. I wish to complain about this shroud that I purchased a week ago from this very boutique.

Charny: It may be a beautiful ethereal image my lad but the pilgrims complain they can hardly see it! I wanted a clear bold image like the one that gets them packing in at Besançon Cathedral. This ones too faint and blurred.

Shopkeeper: But just wait until they see the photographic negatives! You won’t be able to keep them away once they see how lifelike the image looks on them.

Shopkeeper: Yes. Once photography is invented, they’ll be queuing from one end of Lirey to the other to see your shroud. You mark my words.

Charny: When’s that going to happen?

Shopkeeper: In about 500 years. Beautiful image isn’t it? Don’t you admire the elegant hands?

Charny: 500 years? I need pilgrims to be spending money in Lirey now, not in 500 years time! And about the hands, I’ve got a bone to pick with you about them too.

Shopkeeper: You’ve got to marvel at the craftsmanship haven’t you squire? Such graceful fingers.

Charny: But where are thumbs? There’s four fingers on each hand but they’ve missed off the thumbs!

Shopkeeper: That’s right. You’re not supposed to see them.

Charny: You’re not supposed to see them? I’ve read the Good Book from cover to cover my lad and I’ve not found any mention of the Romans chopping off thumbs! Am I supposed to believe that Matthew, Mark, Luke and John all happened to forget that they lopped off the opposable digits?

Shopkeeper: No no. My boys didn’t put any thumbs on it because when the crucifixion nails go through the wrists, they pierce the ulnar nerve which make the thumbs turn in behind the palms…

Charny: Oh and that’s another thing – the pilgrims keep moaning to me that the nail wounds are in the wrong place. Everyone knows they should be in the palms. Just take a look at any painting of the crucifixion and where are the nails? They’re always in the palms!

Shopkeeper: Ah but you see, that wouldn’t work – they wouldn’t support the body. Forensic scientists are going to prove that.

Shopkeeper: No, that’d be ridiculous!

Shopkeeper: Oh and by the way squire, you never paid me my travel expenses.

Charny: I was coming to that. What’s this bill for a trip to Jerusalem?

Shopkeeper: I needed to get some dirt to put around the knees, feet and nose. It makes it look more realistic you see…

Charny: You went to Jerusalem to get some dirt!  Have you looked at the floor of your shop lately? If you tried sweeping it once in a while you could shovel up enough dirt to cover a dozen shrouds.

Shopkeeper: But it wouldn’t be Jerusalem dirt, would it? They’ll spot that straight away once they start doing spectral analysis of the dust crystals using high resolution microprobes in 650 years time. No, you wouldn’t want them finding it’s a fake that easily would you squire? Having some 20th century know-it-alls calling you a charlatan and a fraud! Besides, I needed to go there anyway to get some local plants so I could leave traces of pollen.

Shopkeeper: You get it in flowers.

Charny: I’ve never heard of it!

Shopkeeper: That’s because pollen won’t be discovered for another 300 years but as soon as they start examining it under a microscope another two or three hundred years after that, well…

Charny: I’ve had enough! Let me make sure I understand this. You’ve made me a Shroud to help bring the Pilgrims into Lirey, with an image that people can hardly see that’ll look wonderful when this photography thing is invented in 500 years time; it doesn’t have any thumbs and the nail wounds are in the wrong place except in 600 years they’ll think they’re right; and it’s covered in dirt and some as yet undiscovered stuff called pollen which you collected specially from Jerusalem at great expense in order to fool people 650 years from now?

Shopkeeper: That’s right! Now about my bill for travel expenses.

Charny: I’m not paying it.

Shopkeeper: What if I throw in a Crown of Thorns?

The contention that someone “faked up” the Turin Shroud really doesn’t stand up to close scrutiny.  Rather than accept the claims of Professor Hall, it’s perhaps better to take note of the words of Arthur Conan Doyle as expressed by his fictional creation Sherlock Holmes :

“…when you have eliminated the impossible, whatever remains,
however improbable, must be the truth.”

A groundbreaking book by Joe Marino was published in late 2020 and the insights contained within this comprehensive and extensively researched book remove any remaining trust in the result of that flawed scientific test.  (Click on the cover image below to view on Amazon). 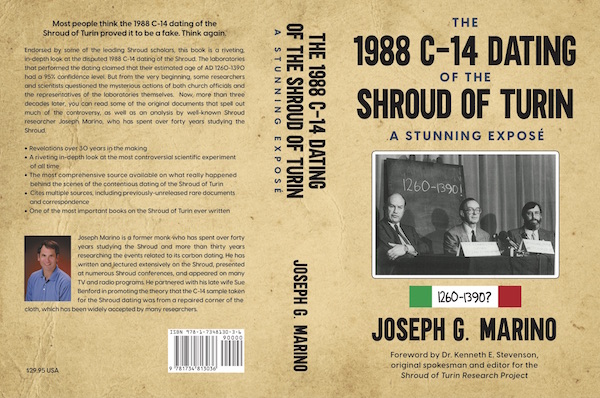 Is the Intuitive Mind a Sacred Gift?