Where does music come from? Part Two

In part one I quoted various musicians – popular and classical – who all felt that their music came from a source beyond the brain. In the words of John Lennon, “It’s like being possessed: like a psychic or a medium”.

Could it be possible that John Lennon was right?  Is it conceivable that he and other composers are somehow ‘channelling’ music from non-physical beings? 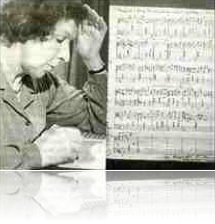 When I was at school in the late 1960′s, I read about a London widow called Rosemary Brown. She was a clairvoyant who sprang to fame when she claimed that the spirits of various composers regularly visited her. These included renowned musicians such as Beethoven, Schubert, Liszt, Chopin and Rachmaninov who had all dictated new piano pieces for her to inscribe during their visits.

This story made great material for the Sunday newspapers of the time.  They thrived on some of the events that Mrs. Brown related, such as how Liszt had helped her find bargains in the fruit section of her local supermarket! It’s probably no surprise that many who read her story quickly dismissed it as a crude attempt to get some fame and notoriety in order to make money.  Others ridiculed it as the ramblings of a lonely, deluded woman who had some ‘imaginary friends’.

To be honest, I had considered both these possibilities.  Indeed I might easily have become one of the sceptics were it not for the fact that many experts in the field of classical music who had examined her music had been amazed and puzzled by what they saw and heard.

It might seem implausible that these long departed composers had dictated music to Rosemary Brown, yet somehow any other explanation seemed even less likely. After all, she had a limited musical ability and no training apart from a few piano lessons as a child.  Despite these limitations, she suddenly became able to produce music far beyond her own capabilities as a musician. Not only that, but most of the pieces that she had produced were faithful to the style of the composers who she claimed had dictated them.  In the opinion of the composer Richard Rodney Bennett, “you couldn’t fake music like this without years of training”. Ian Parrott, Emeritus Professor of Music at the University of Wales, published an entire book, ‘The Music of Rosemary Brown’.   This book expressed the view that her music bore distinctive hallmarks of the purported composers.  According to Parrott, even professional musicians would find it difficult to replicate this achievement.

Rosemary Brown wrote three books: ‘Immortals at my Elbow’, ‘Unfinished Symphonies’ and ‘Look beyond Today’.  All of these books cover aspects of her story and her experience of working with these famous names. Although these are no longer in print, it is possible to obtain second-hand copies through on-line bookstores. It’s also possible to find performances of her music on You Tube, such as in the example here. Check them out and I’m sure they will help to convince you that Mrs Brown was neither a fraud nor an insane widow.  She was just an ordinary, humble housewife who was chosen to provide evidence of how music can be received.

Click HERE to go to ‘Where does music come from? Part 3’

Watch the video below to learn more about the story of Rosemary Brown and the evidence supporting her claims.