Where does music come from? Part Three 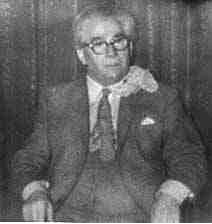 One of the most celebrated mediums of the 20th Century was Leslie Flint.  He was a direct voice medium who possessed the rare gift of being able to manifest the voices of those who had ‘passed over’ at a point in space, rather than through his own speech. Those who connected were often the departed relatives and friends of those who had requested a sitting. Others however included famous personalities, some of whom returned on several occasions to pass on their messages to the world.

Fortunately, Leslie Flint decided to record many of the sittings from 1946 onwards and through the help of his colleagues George Wood and Betty Greene, he created an extensive archive of audio recordings. Some of these have recently been published and can be found at https://www.leslieflint.com. 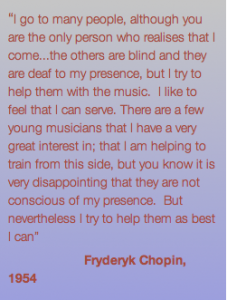 One of his regular ‘visitors’ was the Polish composer, Fryderyk Chopin. In 1954, Chopin gave a message in which he described not only how he was trying to help musicians, but also his frustration at their inability to see or hear him (see extract opposite). Interestingly, Rosemary Brown, a medium who was also frequently visited by Chopin, attended one of Leslie Flint’s sittings. She later confirmed that Chopin spoke to her through this direct voice method in the same manner, and with the same Slavonic-French, accent that he used when in telepathic communication with her.

If you visit the website, you will find several recordings of Chopin speaking at Leslie Flint’s sittings, including one where he describes ‘assisting’ a pianist to produce a wonderful concert performance. To that young pianist, this experience must have felt very similar to this description by Pink Floyd’s Dave Gilmore:

“… just suddenly, it’s there; it just slips out of your fingertips onto the instrument easily.  You worry about it afterwards and think ‘Where did that come from; who did I steal it from?’, because it’s so easy.”

Click HERE to go to ‘Where does music come from? Part 4’

Watch the video below to learn more about Leslie Flint and Rosemary Brown, as well as the evidence supporting their claims.