There IS Music in the Spacing of the Spheres! 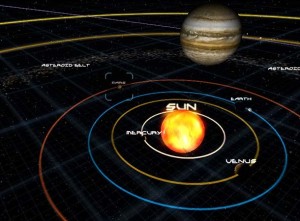 Some people visiting this blog will be familiar with the term Music of the Spheres, a phrase usually associated with Pythagoras. It is a term derived from one of his most famous quotations.

“There is geometry in the humming of the strings, there is music in the spacing of the spheres.”

It’s generally accepted that the spheres that Pythagoras was referring to were the planets and stars.  Although his statement is very specific, the phrase – “..there is music in the spacing of the spheres” – is not usually taken to be literally true. After all, science teaches that we didn’t know the spacing between planets in our solar system until the 16th Century.   It was the discoveries of Johannes Kepler that made it possible to calculate the relative distances between planetary orbits. Since Pythagoras lived approximately 2000 years before Kepler, it’s reasonable to assume that he had no knowledge of interplanetary distances.  And yet he clearly believed there was a connection between music and the distances between celestial bodies. If that is the case, then what might this music sound like and would we recognise it as being musical?

Relationship between pipe length and pitch

Pythagoras famously discovered the relationship between simple numerical ratios and the relative pitch of notes played using strings or pipes. For example, blowing across a tube such as a Peruvian Panpipe produces a sound at a specific frequency.  Doubling the length of the tube lowers the pitch by exactly one octave. Doubling the length again lowers the pitch by another octave, and so on. Notes which are octaves apart provide the purest harmony when played together and are commonplace in different musical traditions.  Indeed we often find this this tone combination appearing in Celtic, Indian, Eastern and native American music, for instance in the drones of Scottish bagpipes, Irish Uilleann pipes, or in the chants of American Indians.

When we examine the distances between the orbits of different planets in our solar system, we find that the same ratios that exist between musical octaves. The planet nearest the Sun is Mercury and next nearest planet is Venus.  Doubling the distance between the orbits of Mercury and Venus brings us to Earth’s orbit: equivalent to one octave lower.  At double this distance we find the orbit of Mars: another octave lower.  Doubling it again brings us to the asteroid belt which many believe to be the remains of a destroyed planet.   At double the distance from the asteroid belt we find Jupiter; double it again and we reach Saturn’s orbit and double it once more and we reach Uranus.  In total, the orbital distances of seven consecutive planets in our solar system correspond to octave ratios in music.

To illustrate this I’ve put together a short audio clip with a sequence of seven notes played by string instruments.  Each of the notes is an octave apart and represents the orbital distances of Venus through to Uranus. As you will see, these notes played in unison create a very pure and majestic sound.

We might never discover whether Pythagoras actually knew the distance between the orbits of planets in our solar system.   It  does however seem to be too big a coincidence that they conform so perfectly his principle that “there is music in the spacing of the spheres”. Even today, science cannot explain why the planets appear in these specific orbits. Perhaps an even greater challenge for science would be to explain how Pythagoras was so sure that they did!