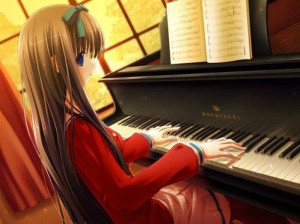 I spoke recently with a friend of mine whose daughter began learning to play the piano two years ago. When I asked how she was doing, he told me that she was progressing well and still enjoyed playing.  She was however worried about taking her Grade Four Piano Exam. “The trouble is,” he explained, “she has difficulty reading music.”

I mentioned that Paul McCartney has always acknowledged that he can’t read or write music and that his music is constantly being played and performed all around the world. He’d even composed the orchestral music for a ballet that was recently premiered in New York. “That’s all very well,” Peter replied, “but pop musicians don’t need to pass piano exams!”

A little later, I reflected on that conversation and in particular his worry that “…she has difficulty reading music.” Reading Music! – what a strange expression! Surely music reaches us through the ears, not the eyes? The more I thought about it, the more absurd this concept of ‘reading music’ seemed.  After all, artists don’t listen to a painting or hum a sculpture.  And yet musicians, who work with the medium of sound, are expected to learn how to read and write music if they are to be taken seriously.

The expression ‘read music’ does of course refer to reading the notation that musicians use to represent musical sounds.  The piano sheet music shown here is a typical example. The composer has encoded musical sounds using written symbols and providing the performer is able to read and interpret these symbols, he can play the music in the way that the composer intended.  Or at least that’s the theory. In practice, musical notation has its limitations and if a piece of music is performed exactly as it is written, the result is usually disappointing and not how the composer intended it to sound.

You can check this yourself. The sheet music shown here is from Chopin’s ‘Tristesse’ Etude Op. 10 No. 3, a beautiful, melodic piece for piano. I’ve used a computer and some recorded Steinway Grand Piano sounds to reproduce the notes exactly as they’re written.  It sounds like this:

For comparison, here is a recording of a leading concert pianist playing the same passage:

I’m sure you will agree that they sound very different. The first version might play all the right notes in the right order, but lacks feeling or emotion.  It doesn’t sound unpleasant but it’s quite lifeless and almost robotic in character. In contrast, the second version is expressive, extremely moving and much more satisfying to listen to.  In this version, the performer has made the difference.  He has applied his creativity and intuition to find the essence of the music that is hidden behind the notes on the page.  The result is a performance which is full of passion and feeling.

I don’t wish to undermine the importance of sheet music. After all, orchestras could not function without it.  Sheet music was also the only way that composers could pass on their music to a wide audience before the invention of audio recording devices.  Indeed most of the music composed over the past five hundred years would have been lost  without sheet music. It’s clearly a valuable aid to anyone who wishes to work with music.

Sadly however, music education in our schools and colleges has elevated the study of music notation, structure and form above the creation and performance of music.  Consequently, music students spend less time engaged in highly beneficial activities such as playing an instrument or singing. This method of teaching music may help students to analyse or dissect musical compositions but it doesn’t develop the ear.  It also fails to stimulate the creative, right side of the brain, which holds the feeling and intuitive centres which are so important when making, experiencing and learning about music.

The power of music

We live in a world that is rich in musical diversity. Every culture and every period in recorded history has its own musical style and we are uniquely placed today because we not only have easy access to this wide range of music, but we can also observe the rise and fall of current musical trends as we pass through the years. Scientists are continually making new discoveries that confirm the power of sound and music, providing us with growing evidence that music is a force of nature that can assist health and positively affect the environment.

There is so much to learn about music once we step beyond the study of notation and musical form.  If you are interested in some of these topics and would like to understand the metaphysics of music and sound vibration, you may wish to take a look at the Musical Medicine Manual.

In meantime, if like my friend’s daughter you want to play an instrument but struggle to read notation, or get bored repeating the same pieces to try to become note-perfect, just put away the sheet music and start to play ‘from the heart’.  After all, that’s where all the best music comes from.

See The Importance of Teaching Music in Schools

Tuning in to your memories There IS Music in the Spacing of the Spheres!